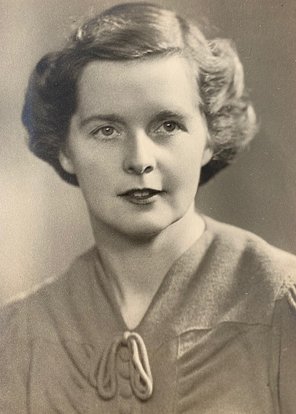 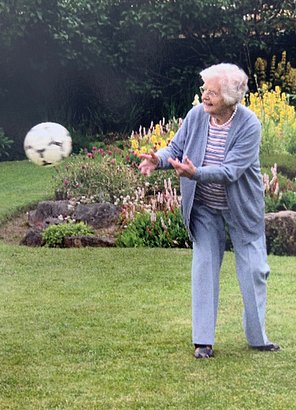 The inspiration behind No Nonsense Chutneys was Nina Dorothy Leigh (nee Price-Davies), who was born in 1908 in the sleepy Welsh suburb of Radyr, a few miles from Cardiff, the Capital City of Wales. Her parents were Edith and Tom.

Tom was a bank clerk in nearby Pontypridd and he went by train every day from Radyr to his work. In 1910, Tom was transferred to Caerphilly where Nina’s sister Ailsa was born, and in 1913 another sister, Rona, was born.  They lived above Lloyds bank in Caerphilly very near the Castle. Three years on Tom had another promotion and the family was moved to Maesteg. Here the family lived in a very nice, detached house with a big garden.

As the eldest of the three daughters, Nina was expected to help her mother around the house and to take some responsibility for her sisters’ upbringing too.

Nina wasn’t encouraged to have a career but rather to stay at the family home; this shaped Nina’s life, and as she grew older, Nina became adept at many things, learning to be extremely frugal and able to tackle most household problems as they arose. Her love for cooking was borne out of these early days. So was her ‘no-nonsense’, occasionally blunt, attitude to life!

When Nina married Austen some years later, the demands on her cookery skills accelerated as her husband took over the family firm, a wholesale food grocery business based in Cardiff. As the firm grew ever more successful, Austen chose to host important suppliers at their home rather than at a hotel and asked Nina to produce elaborate (but homemade) dinners most weeks. Needless to say Nina became a very accomplished cook as she catered for Austen’s regular stream of guests.

After Nina and Austen had raised their own children, and then subsequently the next generation arrived, the importance of no-nonsense, home cooked food remained a crucial part of the wider family ethos.

One of the recipes which was a staple in Nina’s repertoire was her homemade apple and tomato chutney. This recipe had been handed down to Nina by her Grandmother and in those days preserving fruit and vegetables was tricky, so recipes relied on a good deal of sugar and vinegar to help preserve them. Nina’s chutney became very popular within the family and it became a rite of passage to learn to make this very special chutney.

As the subsequent generations married and dispersed across the UK, so the famous apple and tomato chutney began to be made by Nina’s grandchildren not just in Wales, but in Warwickshire, Bristol, London and the Home Counties. Unsurprisingly, friends and neighbours frequently asked if they could ‘steal a jar’ for their own families, which wasn’t always appreciated given the small volume available!

And so this is how NoNonsense Foods was born. Not on purpose of course. Like many good things in life, it just sort of, well…. happened.

Faced with the thorny issue of demand exceeding supply of Nina’s chutney, what to do? Who could help produce this chutney recipe to the same quality standard set by Nina all those years ago?

After some rigorous recipe testing and trial batches, Nina’s Apple and Tomato Chutney is now available for everyone to enjoy, thanks to the assistance of a small artisan producer in the heart of Wales, who has painstakingly followed the original recipe. The small batch, no-nonsense homemade ethos is the key to maintaining the quality that Nina would expect.

Nina’s original recipe Apple and Tomato Chutney has been complemented by two additional no nonsense relishes; Red Onion & Orange Marmalade and Chocolate & Chilli Jam. Both are simply made using the finest ingredients, and in line with Nina’s renown determination to move with the times, both have a touch of the unusual to produce the exceptional.

Good food. Well made.
Nina wouldn’t have had it any other way…